Ukrainians detained cars at a checkpoint

The world community wondered whether they would get there or not for half a day, watching the movements of the IAEA mission in the “gray zone” between Zaporozhye and Energodar, a satellite town of the Zaporozhye nuclear power plant. At 2 p.m., news agencies posted a video of the mission entering the territory controlled by Russian troops, and then to the station itself.

The passage looked impressive: in front was an armored personnel carrier, followed by a traffic police car, and then a string of cars of international inspectors in escorted by a helicopter flying low over forest plantations. In general, we got there. Despite the real horror that played out that day. 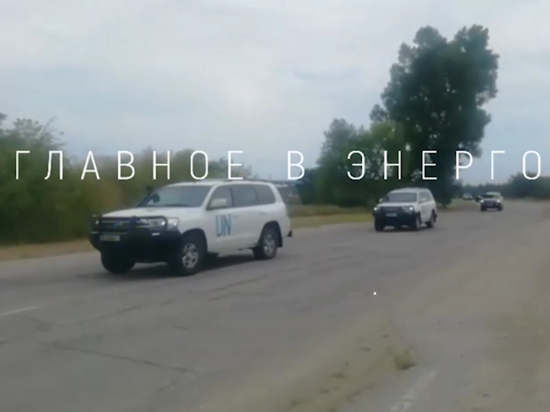 In the morning, Energodar, already accustomed to shelling, woke up from explosions at about 6.00. A day earlier, more than 100 UAVs and artillery hit the city. Several explosions thundered in the area of ​​the Sovremennik Palace of Culture, a fire broke out in two kindergartens, and the facades of several residential buildings were damaged. At least three residents were killed and five were injured. Due to regular shelling in Energodar, all planned events for September 1 had to be cancelled.

The ZNPP was not left alone either: four shells exploded 400 meters from the first power unit. The fifth power unit was stopped, shifting the entire load to the sixth. For some time, part of the urban areas remained without electricity and mobile communications, which were promptly restored.

At this time, around 8 am, IAEA representatives left Zaporozhye in 9 white jeeps and headed to Energodar. The head of the IAEA, Rafael Grossi, was aware of the shelling that had begun, but the column continued to move in the direction of the city. However, at the checkpoint near the line of contact, the Ukrainian side delayed the main part of the convoy for three hours, allowing only the first vehicles, where there were representatives of the mission without basic authority, to go ahead. These cars continued to move and were freely passed by the CAA of the Zaporozhye region.

Remaining on Ukrainian territory, Grossi was forced to negotiate with representatives of the Armed Forces of Ukraine so that they would not delay the mission. After some time, the Ukrainians decided to let the IAEA inspectors through. The main part of the convoy, including the car with Grossi, only by 13:20 passed to the territories controlled by Russia through the Vasilievka checkpoint, from where the mission was escorted by Tigr armored vehicles.

It is likely that the delay of the inspectors at the checkpoint of the Armed Forces of Ukraine was due to the hopes for the success of the sabotage operation, which the Ukrainian side intended to carry out on the day the IAEA mission arrived at the ZNPP. Several Ukrainian groups tried to storm the Zaporozhye station. But unsuccessfully.

As promised, Russia provided security for its part and, despite the difficult situation in the station area, did not interfere with the arrival of the mission. Now the word is up to the specialists from the IAEA.