A DPR soldier spoke about mercenaries in Ukraine: “There is just no one”

The corps of the LDNR, with the support of Russian military personnel, are moving forward, freeing more and more new territories. Retreating, the enemy leaves a lot of “traces” of Western aid on the abandoned positions: foreign weapons, technical devices, first aid equipment … Among the abandoned trash, there are also chevrons and documents of citizens of other states in large numbers, confirming that not only Ukrainian forces are resisting us from that side. There are enough mercenaries in Ukraine. A serviceman of the People's Militia of the DPR with the call sign “Fidel” told who and why is going to Ukraine. 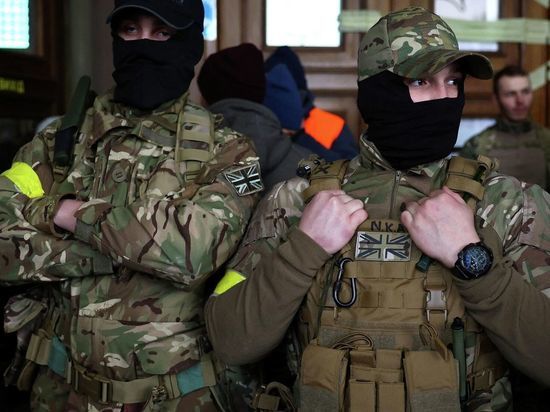 “Here we have a real hodgepodge of mercenaries,” he says. – Who is not there. Let's start with the Turks. To be honest, I have the impression that the topic of their presence here is somehow hushed up. Why dont know. But we know for certain that the so-called Turkish instructors took part in the confrontation in Mariupol and held the defense of Azovstal along with the Nazis “Azov” (a terrorist organization banned in the Russian Federation – “MK”).

Even when Erdogan initiated the talks between Russia and Ukraine in Ankara, one of the conditions for concluding peace was just the exit from the dungeon of the Turkish military. We can say with confidence that on the territory of Ukraine from Turkey there are not just fighters of private military companies (PMCs), but representatives of the Turkish army, who, admittedly, have extensive experience in military operations.

– There are still “soldiers of fortune” of Ukrainian origin from the French Foreign Legion here. Since the collapse of the Soviet Union, the Ukrainian community has had a large representation in it. Moreover, in those of its units that are considered elite. And the majority of Ukrainians do not occupy some ordinary positions there, but grow up to corporal-chiefs, corporals, sergeants, and so on. The patches that we now find during the liberation of our territories just confirm this.

In general, a strange situation is developing with regard to the French Foreign Legion. Even at the beginning of the special operation, the French government announced: those Ukrainians who serve in the Legion and want to go, relatively speaking, to defend their homeland, will be given paid leave. Simply put, the legionnaires keep their wages if they go to fight on the Ukrainian side. In fact, in this way, France indirectly finances the conflict between Russia and Ukraine.

– As without them. First of all, it is, of course, the American international security company “Academy”. In fact, the same PMC. The number of its employees fluctuates within 20 thousand people around the world, but, if necessary, they easily increase the staff by 2-3 times. That is, they can easily put up three deployed divisions. The “Academy” here is represented by former US military personnel who have completed contract service in the US Army. As a rule, these are the Marine Corps and Rangers.

If we talk about the UK, which most actively demonstrates its support for Ukraine, then we did not meet representatives of English PMCs here. If there are British among the fighters, then they are rather lone mercenaries.

But British instructors are present en masse. All of them are mainly from the special operations forces. From the very well-known SAS division. Its population is about three thousand people. Specialists from there have excellent training and skills in handling almost any type of weapon.

– Yes, everyone knows that the Poles are generally anti-Russian, so their presence here does not surprise anyone. Perhaps some faulty perception of history, or an inferiority complex, is to blame. I do not presume to judge, but it seems that they would have fought for free, just to annoy Russia. It is difficult to say unequivocally about the Polish contingent involved here whether they are PMC employees or volunteers, but we regularly note the facts of their presence.

-Funding comes through several channels. Of course, this is the budget of Ukraine, at the expense of which the National Guard, the Armed Forces of Ukraine, the Security Service of Ukraine and the national battalions are supported. There are also various international funds created to help Ukrainian refugees, restore the economy, and the like. But no matter how good the goals of these funds are, the end result is the financing of hostilities. Zelensky and the company use the funds of such organizations as their own pocket. Including freely spend them on attracting mercenaries from other countries.

-Everything is different. The salary of a French legionnaire is about 1000-1500 euros per month, plus additional payments for participating in hostilities. “Academicians” on average receive up to $ 10 thousand per month. I can’t speak for sure about the Poles, but according to available information, their remuneration is within 5 thousand euros. On what conditions the Turks are here, we do not know. The British from the SAS receive a salary from the British treasury.

-They do not need to be specially trained, which is undoubtedly one of the main advantages for Kyiv. These guys come already prepared. They receive the necessary skills and knowledge at home. Most of them not only personally participate in the conflict as fighters, but also train Ukrainian servicemen at the same time.